I’ve given quite a bit over the years as the eldest sibling): “whatever you do, join a sport team at

university”. That is what she did and never looked back.

As an English Teacher I implore my pupils to avoid clichés as much as possible, but I am going to dive

right in and say that ‘sport has changed my life’. Sport isn’t something I do, but live. It’s a part of my

everyday life and I wouldn’t change it. Not for a minute. Many of the closest people in my life are

sport fans, from friends, to my housemate, and beyond – it really is awesome finding with similar

goals and attitudes, it makes such a difference.

When I was 11 I discovered hockey at school. I was encouraged to join a local team, and after a stint

at one, I found another that still has a special place in my heart. It was a family affair. My cousins

played for Ardudwy ac Arfon Hockey Club and said they needed a keeper, and I was sold. I had

played keeper since I was 11, but the club became more than a team for me. The level of acceptance

and understanding from a group of like-minded girls who played, trained and socialised together on a

regular basis became the foundation to my development both as a player and as girl growing up. The

opportunities for development was vast, whether you wanted to try new positions on the pitch or

you wanted a role on the committee to further add to the experience of being part of a club, they

were supportive and embraced all ideas. I thrive on encouragement.

rather special due to having to overcome a variety of challenges set against you, together as a team

effort. That bond fashioned together in piercing rain on a glum November Saturday afternoon amidst

the slumbering hills of somewhere really brings you together. Those moments are the ones that I

cherish. Those long trips in the car to away games where you are trapped amongst hockey bags,

extra coats and sandy shoes, with the soundtrack of cheese songs pulsating from the speakers of a

battered gold Fiat Punto are memories that were created because of hockey. Some of my best friends

today are the ones I played hockey at Lancaster University with. The ones who then became

housemates, and now become reunion friends where we come together from across the country to

christened with in uni for no apparent reason but has stuck with you forever.

This ethos ripples through hockey as a sport. No matter which team I encounter, read about on

social media to playing against on the astro, those values that fundamentally entwine the members

of the sport together is utterly compelling. The inclusivity and pride of belonging to something really

Today, I play hockey for Clwb Hoci Cymric, which as you can tell, is very proud of its Welsh roots. The

medium of Welsh; a branch of Clwb Cymric Football and now Netball too. They have been nothing

less than awesome. When I moved down to Cardiff, I knew that joining a team would be an ideal

way of meeting new people, keeping fit and socialising, and I struck it lucky with these girls. They

have become a constant in my life that I am always looking forward to every week, whether it’s

training, matches or just a catch up at the pub.

I also write for Scoop Hockey, an online magazine I created a few years ago, but recently resurrected

because I feel more talk means more awareness, which can only be positive, right? This is a way I can

couple together two of my favourite things: writing and sport.

I honestly can’t stress the benefits of joining a club, whichever sport takes your fancy. If you’ve not

done it, do it! Clwb Hoci Cymric welcomes all speakers of all languages, naturally.

the ability to change lives, even in the smallest of ways but the rewards and benefits you’ll reap is

unimaginable. It’s all about the little things in life, so how about making a little change and get

involved? I promise you won’t regret it. 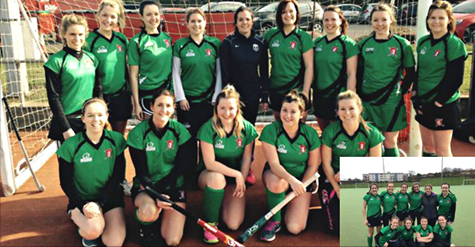 LGB&T Sport Cymru
First half ✅ now to a big second half don't forget to follow @TheRainbowWall for all your Euros adventures as we ge… https://t.co/zOlhStw1t53:05PM June 12th15:05 12fed Mehefin